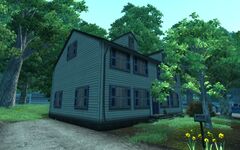 The Rockwell residence is a house in the Tranquility Lane simulation.

The residence of Roger and Janet Rockwell, neighbors to the Simpson and Neusbaum families.

As with all houses in Tranquility Lane, it stands two stories tall, with the front door entering into the living room. The room has furniture items including a Radiation King television. On the ground level, there is also a kitchen with a rolling pin, and a door to the Rockwell residence basement.

Upstairs, the house has another bathroom, and a bedroom with two single beds, where a diary can be found nearby on a nightstand. The Rockwell house is the only one on Tranquility Lane with a basement, which stores music stands, boxes, and is where Roger's desk is situated.

The Rockwell residence appears only in Fallout 3.