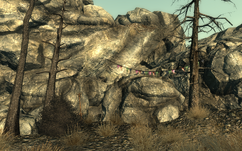 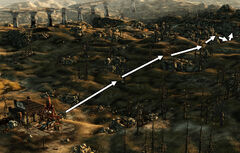 “Listen to yourself, boss! This is Rockopolis; one of the safest places in the wasteland; and you just showed a stranger where it is!”— Argyle

Rockopolis is an unmarked location at the western edge of the Capital Wasteland, north of Girdershade and southeast of the yao guai tunnels. It was once a hidden subterranean village and kingdom until it was overrun by slavers in the 2250s.

Some time between the Great War and 2248, Rockopolis was settled, and established a kingdom. In the summer of that year, their isolationist leader King Crag gave shelter to Herbert Dashwood and Argyle. Not long after, there was an incident between Dashwood and the King Crag's daughter, and as a result, he and Argyle were exiled.[1] The settlement would remain one of the safest places in the Capital Wasteland until 2250/1.

Its demise was brought about accidently by Dashwood and Argyle. While traveling with Penelope Chase, under the assumption she was a "fortune hunter," Miss Chase noticed that they were near the hills where the hidden village of Rockopolis was located. When she lamented not knowing where it was, Dashwood immediately cut her off, and in an attempt to impress her, started bragging about how he and Argyle were old friends of the settlement, further revealing that they knew the secret knock and more. Argyle showed his displeasure in so readily trusting the woman with such privileged information. Dashwood cut off Argyle, assuring him that Miss Chase would not violate the secrets of Rockopolis, and furthermore, they needed a place to hide from the mutants.[2]

Moving through the boulder entrance with the secret knock, they entered Rockopolis, after which Argyle interrupted a flirtatious Dashwood and Miss Chase. Argyle again pointed out that they were in Rockopolis, one of the safest places in the wasteland, and they had just given its secrets to a stranger. Dashwood attempted to dissuade his companion's outburst to Miss Chase, only for her to reveal herself. Pulling a gun on the pair, she claimed that her slaver associates would be right behind them. They then realized who she really was - not Penelope Chase, "fortune hunter," but instead the "Black Widow," leader of the slavers. She boasted about how the slavers could never have found the denizens of Rockopolis without Argyle and Dashwood.[2] As she was demanding no trouble from Argyle, he used his kung fu skills, using a move he called the "Eagle Claw" to rip out her heart, killing her instantly.[3]

While Argyle made a pun and Dashwood congratulated him, King Crag arrived at the scene. Crag was both despondent at seeing Dashwood and shocked at the dead woman in front of them. When Dashwood informed him of the impending slaver attack, Crag became so furious that he ordered his people to kill the duo. They immediately took off running into the cave system and came to a cliff. Dashwood went first and almost fell, barely clinging on as Argyle rushed to help.[3]

How this ended is unclear, as Argyle's corpse lies near the entrance to Rockopolis in 2277. The village was ultimately captured by the slavers, who enslaved as many as they could and sold them north to the Pitt.[4]

The entrance is a boulder that can be interacted with like any other door or entrance. One dead tree is on the right of the entrance, two are on the left. And as the attached pictures show, there is a length of bunting above the boulder. It is easiest to find at night, as there are lights glowing on the rock face as you approach it from the east. The entrance is very close to the center of that particular square on the map. A random encounter location is near the entrance. There is a string of multicolored plastic triangle pennants (much like those found in Little Lamplight) above the entrance boulder.

If one approaches from above, they'll see a small canyon. If continuing to look down, one will see a soft glow. Jumping down will allow entrance to Rockopolis without ever having seen the exterior.

The only accessible section of Rockopolis is now a small area with some random objects. The tunnel to what was the rest of Rockopolis itself is permanently blocked by rocks. The area has the appearance of a cave-dwelling but lacks any beds. The corpse of Argyle can be found near the cave in.

Rockopolis appears only in Fallout 3.

In an interview with lead designer Emil Pagliarulo, he incorrectly stated that Rockopolis was located near Paradise Falls.[5]

Unarmed bobblehead next to Argyle's remains

Rollings -- We're done holotape
Add a photo to this gallery

Retrieved from "https://fallout.fandom.com/wiki/Rockopolis?oldid=3341394"
Community content is available under CC-BY-SA unless otherwise noted.
... more about "Rockopolis"
RDF feed
Has platform
PC +, Playstation 3 +  and Xbox 360 +