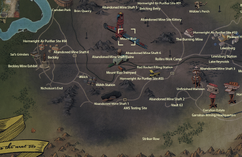 The Rockhound is a vehicle and workshop location. It is a massive ore excavation platform that was once used by the pre-War industrial company Hornwright Industrial to mine ore. After the Great War, the drilling rig sits abandoned atop Mount Blair.

Created by Hornwright Industrial, the EXC-97 "Rockhound" bucket-wheel motorized excavator was advertised as an integral part of the tantalizingly lucrative world of strip mining. The Rockhound is rated to move over 11,000 cubic meters of earth per hour and could operate with a crew of only twelve. Each of the buckets on the massive cutting wheel was cast from solid black titanium, ensuring every cut would remain accurate and deep. Coupled with four ignition reactors that utilize proprietary technology developed by Hornwright Industrial, it was theoretically capable of working indefinitely, as long as these reactors were supplied with ignition cores. As the symbol of Appalachian industrial might and acumen - and by extension, of the mighty Hornwright family - it was widely advertised to attract investors and advance the idea of a fully automated Appalachia.[1]

The reality was far less than that. While the Rockhound was impressive, strip-mining Mount Blair had a devastating environmental effect, polluting the entire region and turning the resource-rich mountain into a desolate stretch of land nicknamed the Ash Heap. Furthermore, the Rockhound was far less impressive in practice than it was on paper. The four reactors provided a total of 8800 MWe, which drained the ignition cores in just three minutes. After intervention from headquarters, the power was dialed back to 1750 MWe, increasing longevity.[2]

However, the skeleton crew could not effectively oversee the gargantuan machine. Standard safety checks could - and did - miss major malfunctions, such as faulty seals on the main fluid reservoirs, leading to six thousand gallons of hydraulic fluid being discharged into the soil of Mount Blair. The company deducted the expense of repair from the crew's paychecks.[3] Moreover, the company demands led to a 24-hour operation mode, a third work shift and the need to change the wheel buckets every three days, to maintain the profitability of the operation without regard for the environment.[4]

The miners of Appalachia saw the Rockhound as a symbol of the soulless automation that was stripping them of their jobs. During the massive riots that erupted after Atomic Mining Services forced miners out of Welch in October 2077, miners took to Mount Blair and seized the Rockhound. For eight days, the miners held out, striking and demanding a right to work, until the National Guard sent in specially-designed fleets of combat robots - protectrons, Mister Gutsies and even robobrains - to fight off the rioters. Echoing the events of the battle of Mount Blair over 150 years earlier, the strikebreakers took out the miners and returned control of the Rockhound to Hornwright.[5]

The Rockhound is perhaps the single largest vehicle in the series, at least insofar accessible ones are concerned. There is no separation of internal or external spaces. The massive machine rests atop Mount Blair, surrounded by the conflagration created by the strip-mining. It is divided into three distinct decks, connected by an elevator.

The lowest deck contains the crew quarters and mess hall, the ignition reactors used to activate it during the event, and the command center upfront. There's also an auxiliary cabin at the front, for the driver. The deck connects to spans or gantries over the side tracks, which were used for storage and as strong-points during the riots. The stairs from here lead to the second deck, above the balance arm and the excavator arm in front. The topmost, observation deck can only be reached by elevator and offers minor loot.

The Rockhound can be used by the player character to dig up ore for personal use. In order to harvest ore from the rig, one must first have ownership of the workshop located on the utility platform on the back of the rig. They then must process to the main control station in the center of the rig. They must access a terminal near the control panel. Accessing reactor technology they gain the ability to craft ignition cores that are needed to reactivate the drill platform.

There are four reactors on the rig. Once all of the cores are placed, the player character then must head back to the control center and press the button on the center console to activate the rig. Once activated, they must defend the reactors from constant attack for a total of 30 minutes. Ore is collected in a container on the counterweight supporting area on the back of the platform.

Rockhound concept art
Add an image to this gallery

Retrieved from "https://fallout.fandom.com/wiki/Rockhound?oldid=3352799"
Community content is available under CC-BY-SA unless otherwise noted.