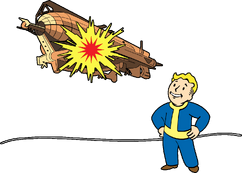 “Assaulting the Institute has been set irrevocably in motion. All able bodied field agents are already en route here. If we abandon our HQ right now our people, our family, will be walking into certain death.”— Desdemona

Rockets' Red Glare is a Railroad main quest and an achievement/trophy in Fallout 4.

After receiving some explosive charges from Deacon, board the Vertibird. There will be voiceover banter between Deacon and Tinker Tom as the latter flies the Vertibird to the Prydwen. After initially only getting the aircraft to spin, Tom proceeds towards the Prydwen. There is nothing much to do here except watch the Commonwealth scenery go by and occasionally pick away at targets with the onboard minigun. Eventually the Vertibird will dock with the flight deck of the Prydwen. From this point there are three options for accomplishing the task:

It is theoretically possible to sneak all the way through the Prydwen without being challenged or directly attacked, though the Brotherhood NPCs will still become hostile at some point during the mission.

If the Brotherhood uniform is not worn, all Brotherhood personnel in the area will immediately be hostile after disembarking from the Vertibird and throughout the mission.

Brotherhood personnel will be armed with laser weaponry. There will also be several adversaries wearing Brotherhood T-60 power armor.

Go through the door at the end of the deck to enter the command deck. There will be less NPCs here and none in power armor. With a careful approach it may be possible to eliminate/avoid all of them without alerting them to the Sole Survivor's presence. The next target is a ladder/hatch to the main deck.

There is a power armored guard at the top of the ladder who will have to be dealt with almost immediately if the NPCs are hostile. This section of the Prydwen has the bulk of the Brotherhood personnel, so if they are hostile toward the player character there will be a lot of incoming fire and at least three power armored opponents. If the player character is infiltrating and their cover is not blown, this is also the most likely place to encounter NPCs that will interrogate them about their purpose. If the player character fights their way in or out, it will result in the deaths of several prominent Brotherhood NPCs.

In either case, the player character needs to make their way up two levels by using the stairways at the sides of the catwalks. The third level should be a central walkway that goes between three large oval structures. These are the gas bags. Each one has a red operating console in the center on the port side of the railing. Walking up and activating each one will set the explosive charges.

Once one has placed the charges, they can choose to continue with the undercover operation and exit the Prydwen without hostilities if they succeeded in avoiding detection or raising insurmountable suspicions by any Brotherhood NPCs. If the Brotherhood turns hostile, then one must run or fight their way back to the hatch to the command deck. If the Brotherhood has turned hostile then, unless he was somehow encountered elsewhere, when the player character emerges onto the command deck, Elder Maxson ,if not killed earlier in the game, will be waiting along with some other opponents. He will be armed with Final Judgment and may have others with him using Gatling lasers. Proceed to the flight deck.

After the Vertibird undocks and flies away for a minute or so, Tinker Tom will announce that they are far enough away and will ignite the charges. The resulting detonation should eliminate all remaining hostile Brotherhood NPCs from the area. Tinker Tom will fly to the area of Nordhagen Beach and tell the player character to disembark so he can stash the Vertibird.

Finishing the quest requires speaking to Desdemona, who has returned to Railroad HQ. Once the Sole Survivor speaks with her, The Nuclear Option will begin.

Retrieved from "https://fallout.fandom.com/wiki/Rockets%27_Red_Glare?oldid=3355495"
Community content is available under CC-BY-SA unless otherwise noted.
... more about "Rockets' Red Glare"
RDF feed
Has platform
PC +, Playstation 4 +  and Xbox One +