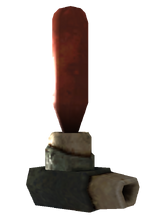 Rocket is a consumable item in Fallout: New Vegas.

Rocket is a variant of Jet that immediately boosts current Action Points by +30, as well as raising maximum action points by the same amount for 60 seconds, and has a 30% chance of Jet addiction. The AP bonus stacks with that of Jet as well as other AP-boosting consumables.

Sold by Jack at the Red Rock drug lab if the player character teaches him the recipe.

Retrieved from "https://fallout.fandom.com/wiki/Rocket_(consumable)?oldid=3488733"
Community content is available under CC-BY-SA unless otherwise noted.