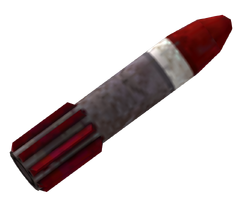 Rockets are a type of ammunition in the Fallout: New Vegas add-on Lonesome Road.

A self propelled projectile armed with a high explosive charge, these are used solely by the Divide's signature weapon, the Red Glare.

Standard, incendiary and high explosive rockets can be crafted at a reloading bench. A single rocket requires the following ingredients:

Breaking down a standard rocket yields:

HE rockets have a 40% greater splash radius, and deal 35% more impact damage with the rocket itself. Blast damage is unchanged.

Two rockets on a table at the Hopeville armory

Seven rockets on the shelf in the armory

100 rockets in this footlocker at the end of the Lonesome Road questline
Español Русский Українська
Community content is available under CC-BY-SA unless otherwise noted.
Advertisement