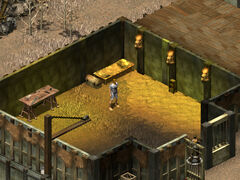 Diesoon, just having been freed by the Warrior

Rock Falls is the third mission in Fallout Tactics.

Rock Falls is a mission that involves little beyond heavy combat; bring some of the AK47s and hunting rifles you found in Freeport and a bunch of combat-centered recruits. You'll start off in a sheltered ruin, so get into a suitable position and get ready to start shooting. You'll want to immediately clear the ruins to the south; there are three raiders milling about. From here, there are three ways into the compound; the north side, through the fuel depot, the south side, through a small mine field, and through the main gate.

From the inhabited ruins, proceed east into even more ruins. There's a raider out front, patrolling near an alarm box. There are another two raiders near a burned out fireplace, asleep. Move towards the paved road, but watch out when you pass the overturned car; there's a raider with an AK on an elevated platform, and there are three more raiders watching the road. A fat raider underneath the sniper's platform and a woman behind the sandbags up the road are both armed with AKs, and a guy with a pistol is hiding in the building with the sniper. From there, crawl under the orange scaffolding and you're in.

If you want to try the north entrance, sneak past the main gate's guards until you reach the fence with "madness" written on it in white. Just to your northeast will be four raiders around a campfire; one has an AK, one has a pistol, one has an SMG, and one has a club.

From there, head east. You'll need to get past a trench, which is guarded by two more raiders with AKs. Just over the trench is the fuel depot. There's a sniper tower out front, but no sniper, so you can grab it and take out the three raiders walking around the depot. You'll want to enter through the door in the north wall, which is locked.

If you want to take the main entrance, then more power to you. There are seven raiders guarding the main gate; four with SMGs, one with a pistol, and two with AKs. The gate itself is unlocked.

Assuming you went right in the front door, you'll be standing in a parking lot with two more AK raiders walking around. The building on the south end of the lot is a makeshift torture chamber. There's a raider with an AK in the waiting room, and three more raiders in the back room. One of those raiders is Daisy-May Gomer; one of the four raider commanders marked for termination. Killing Daisy is worth 214 XP, and you can loot a key off of her to open a door later down the road. Don't forget to free Nanuk when the area is clear.

On the north end of the lot is a building whose purpose isn't clear, but is inhabited by three more raiders. One has a spear, one an SMG, and the final is Luke Daniels, another raider commander. Killing Luke is worth 214 XP. North of the building is a clearing with a large pile of wood and rocks, with another three raiders standing round. To the northeast of Luke's building is the northern entrance, and a building containing Diesoon, a prisoner. Killing the four raiders (three guarding the door, one patrolling with a dog) and talking to Diesoon will earn you the mechanical arm, and complete one of the two objectives. Continue to clear the camp, and remember to talk to Diesoon when the rest of the raiders have died. It is also possible to kill him (ironically for his name) in order to obtain the Big Book of Science and take the arm from his body. That counts as fulfilling the objective as well.

From Diesoon's cell, the building immediately to the south is a workshop where another raider is chilling. From there, head south to find the medical station and the stables. There are three raiders hanging around in the open, and a fourth patrolling the stables. Past the stables is the south entrance and mine field; watch the brahmin to make sure that they don't detonate a mine near you. Inside the med building is Bo Duffy, who's armed with a bunch of grenades but no real Throwing skill. Shoot him from outside, as he's more likely to hit the wall close to him. Killing Bo is worth another 214 XP.

Through the mine field, you'll find another locked gate. The switch to open the gate is in a locked building, which can be unlocked using Daisy's key. There are two raiders armed with AKs on the tops of the walls, and another three guarding the upper entrance to the building. The lower entrance is locked, and needs a really high Lockpick skill to pick. The top floor of the building is inhabited by three men with Scorpios, and the bottom is home to Jesse Gomer and his personal guards. Killing Jesse is worth another 214 XP, and finishes the mission. Killing all four raider commanders is worth a bonus 600 XP. Make sure to go back and tell Nanuk and Diesoon to run, then head to the exit grid.