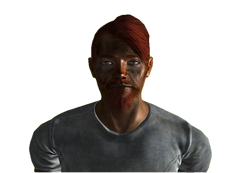 Rock Crick hunters are non-player characters which were cut from the final version of Fallout 3.

Rock Crick hunters can only be added by console commands on the PC.

If placed in the game, Rock Crick hunters will talk about hunting yao guai with each other, and if spoken to by the Lone Wanderer will eventually mention that "there's a 'guai den to the north." Which area they are referring to is not specified beyond this.

Only the ballcap with glasses and stormchaser hat provide a Perception bonus.

Rock Crick hunters were cut from the final version of Fallout 3.

Additionally, the above Editor IDs appear together in a Form List (FFDCRockCreekHuntersLIST) whose only other entry is for Grandma Sparkle. This likely indicates that these are her "boys" who are out "hunting 'lurks" before being cut from the game, with Grandma Sparkle's dialogue the only remaining bit.

Add an image to this gallery
Retrieved from "https://fallout.fandom.com/wiki/Rock_Crick_hunter?oldid=3245589"
Community content is available under CC-BY-SA unless otherwise noted.