The Rock Creek caverns are a location in the Capital Wasteland in 2277. The caverns compose of a large disconnected metro tunnel/cavern that is inhabited by mirelurks, mirelurk hunters, and/or mirelurk kings, depending on level. The caverns consist of a single interior chamber.

The entrance to Rock Creek caverns is a sewer grate at the bottom of a crater that has exposed the sewer system, just to the north-west of the National Guard depot. When coming from the direction of the National Guard depot, there is a guaranteed encounter with two raiders and two super mutants fighting it out with each other. Some areas within the caverns are moderately radioactive.

This section is the only accessible area in Rock Creek caverns. It has a large central chamber and numerous tunnels and offshoots including areas of the metro system. 15 mirelurks are scattered around the cavern. At point D on the local map image seen above, there is a bed that can be slept in along with a safe. At point F there is a mercenary and a wastelander corpse or two, along with an Easy-locked safe, and a few ammunition boxes. Point G has a dead skeletal family and a stimpak and RadAway, along with a teddy bear. Point E just has some dead brahmin and dead ants along with some egg clutches, and point C has a car near the ceiling (apparently where the road once passed through) which will explode if shot at.

The Rock Creek caverns appears only in Fallout 3.

Rock Creek caverns gets its name from the Rock Creek Park in Washington DC.[1] 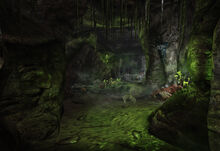 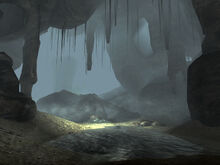