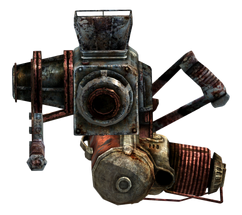 The Rock-It Launcher is a Big Guns skill weapon in Fallout 3.

The Rock-It Launcher allows one to shoot Rock-It Launcher ammunition, a wide variety of junk items from tin cans to teddy bears, at their enemies. Heavier objects will arc more in flight outside of V.A.T.S. targeting; given the rate of fire (3.3/s) and high action point cost (32) it may be important to aim freehand more often. The way that objects would be placed on a shelf is the way they fly from the gun. Silverware and tools will be shot horizontally, while empty Nuka-Cola bottles and the like, which are placed on a shelf upright, on end, will be shot that way from the gun. Nearly any piece of junk can be used as ammunition. Ammunition can also be recovered and reused.

One sometimes cannot use the schematics or even view them, even with all required components in their inventory. [verified]