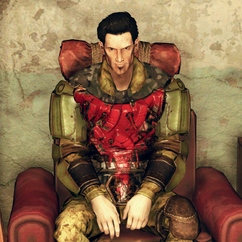 Rocco is a former member of the Settlers in Appalachia in 2103.

Rocco was previously exiled from Foundation, but not without stealing massive amounts of the Settlers' guns, ammunition, and supplies. He paid Lev to betray Meg Groberg and sabotage the Raiders' Vault 79 heist plans, so that he could sneak into the Vault and get its treasure himself. In that way, he hoped to get back in the Settlers' good graces by offering them the gold himself.[1]

Rocco appears only in Fallout 76, introduced in the Wastelanders update.

Retrieved from "https://fallout.fandom.com/wiki/Rocco?oldid=3360729"
Community content is available under CC-BY-SA unless otherwise noted.