Able to hack robotic enemies, making them allies or causing them to self-destruct

Hack an enemy robot for an increasing chance to pacify it. 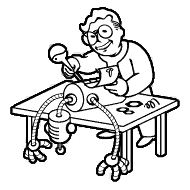 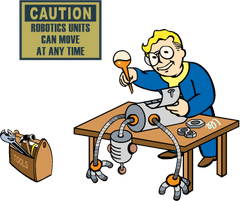 “With the Robotics Expert perk, you do an additional 25% damage to any robot. Also, sneaking up on a hostile robot undetected and deactivating it will put that robot into a permanent shutdown state.”— Fallout 3 in-game description

Robotics Expert is a perk in Fallout 3, Fallout: New Vegas, Fallout 4 and Fallout 76.

Grants an extra 25% damage dealt to robots. Also, entering sneak mode and deactivating a robot from behind permanently shuts it down.

Robots that can be disabled

In Fallout 3, additional dialogue options are unlocked with certain robots with this perk. These often bypass Speech checks:

“Machines will always serve humans, if you have anything to say about it. Hack a robot, and gain a chance to power it on or off, or initiate a self-destruct.”— Rank 1 description

Additionally, with the Automatron add-on, Ranks 1 and 2 of this perk are required to gain full access to all available robot construction options at the robot workbench.

“Machines will always serve humans, if you have anything to say about it.”

In Fallout: New Vegas, if saving a game next to a robot, deactivate it, destroy that robot's limbs and load back, the robot is active but without any limbs. [verified]

Retrieved from "https://fallout.fandom.com/wiki/Robotics_Expert?oldid=3456548"
Community content is available under CC-BY-SA unless otherwise noted.