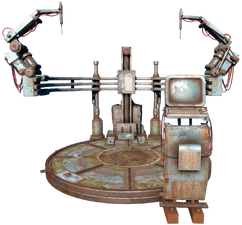 The robot workbench is a settlement object in the Fallout 4 add-on Automatron.

It is used to modify robot companions by equipping them with various robot mods, including Codsworth and Ada. It can only be crafted once the Mechanical Menace quest has been completed. The robot workbench is the largest crafting station in the game both in width and in height. To circumvent any issue with the workbench size or ability to access, they can be built outside.

The robot workbench, unlike other workbenches, appears in the "Special" category of the workshop menu, and doesn't require Local Leader rank two to construct at a settlement.

Player characters can choose components from the following robot models and their Nuka-world variants:

Constructing an automatron encompasses choices in seven categories. An eighth category, "special mods," is only relevant for the Automatron questline and plays no role in the construction of generic robots.

¹With Mr. Handy torso and thruster only
²Not available with Nukatron

The robot workbench appears in the Fallout 4 add-on Automatron and in Fallout: Wasteland Warfare.

Modiphius model
Add a photo to this gallery
Retrieved from "https://fallout.fandom.com/wiki/Robot_workbench?oldid=3498952"
Community content is available under CC-BY-SA unless otherwise noted.