Fallout 3
“The remains of a large robot repair center loom over the settlement of Canterbury Commons.”— Fallout 3 loading screen

The robot repair center is a building in the Capital Wasteland, south-southwest of Canterbury Commons in 2277.

The building was a large discount electronic warehouse named "Darren's Discounts" before the war. In 2277, the building became the base of the Mechanist.

The building is divided into an office area, the Mechanist's forge (this can be accessed by picking a hard lock which will allow the player to reach the forge without fighting) and two repair sectors, sector A and sector B. Each sector is defended by leveled robots, ranging from protectrons up to sentry bots and a leveled automated turret.

Located opposite one of the turret arrays, on a high platform, is a security console, which allows the player to trigger an "emergency pulse" (essentially a massive EMP blast) which will destroy any and all robots nearby. In order to use this pulse, the encryption key must be looted from the nearby (easy) locked safe.

There is an elevator near the entrance which can be lockpicked with a skill of 75 or above, allowing entrance to the Mechanist's forge. Otherwise, the facility is broken up into four sections: Office (left of entrance), two maintenance areas (sector A and B, which are connected by a control room on the upper level) and the forge (an upstairs area used by the Mechanist as a secret lair). Sector B is closest to the entrance, connected to the lobby by a metal door past the elevator, and the forge entrance is on the upper level of sector A.

To gain access to the Mechanist's office, go to the Mechanist's Forge entrance at the south-west corner of the second floor. Go through the door to find yourself in an office that contains, among other items, a coffee brewer. Activate this, and a rusty corrugated metal wall slides away revealing an intricate secret door which opens in an elaborate style.

After The Waters of Life, a small Enclave outpost will appear just south of this position guarded by one Enclave officer and four turrets. The officer holds a keycard that if held by the player character, will stop the turrets from targeting them. There is a terminal in the center of the outpost that has information on why the camp is there.

The robot repair center appears only in Fallout 3. 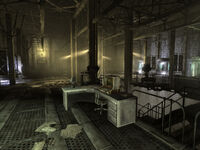 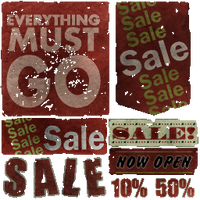