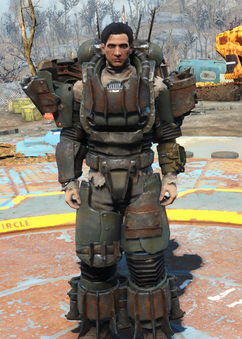 Robot armor is a multi-piece set of armor in the Fallout 4 add-on Automatron. It was first used by the Rust Devils, who had crafted it entirely from the parts of destroyed robots.

Robot armor can be considered a middle ground between "Tier 2" and "Tier 3" armors, such as metal armor and combat armor, respectively. One of its advantages is only requiring Armorer Rank 2 to fully upgrade its resistances, although Rank 4 is still needed for all miscellaneous upgrades. Its increased ballistic resistance compared to energy resistance can be considered an improved form of metal armor. Once it has been upgraded, one can push its effectiveness past that of a standard suit of combat armor. The chest piece bears a striking resemblance to the torso of a sentry bot, albeit much smaller to fit a human collar, while the arm and leg pieces appear to be generic pieces of machined metal.