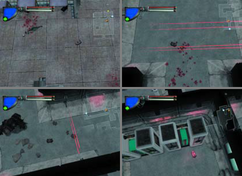 “Control a service robot to access the security computer and disable the lasers.”— Quest description

Robot Control is a quest in Fallout: Brotherhood of Steel. It is located in the Secret Vault Residence 3.

In the Residence 3 area, the way to the Residence hub is blocked by red laser beams. To disable them, take control at Point 6 of a mouse robot that is able to pass the lowest beam. Player character control is given to the robot. Be careful, as it can't take much of a beating from mutants it encounters along the way. Should it get wrecked, a new one will spawn where the original one started.

Scoot the little robot under the laser gates and head for the room directly across from the one that contained the mass of gun robots (7 on the map). Head west and zip under the unblinking laser gate. After tricking the mutants into the beams, head down the corridor to a small room full of computer banks and press the action button to deactivate all of the laser gates. Control then returns to your character. 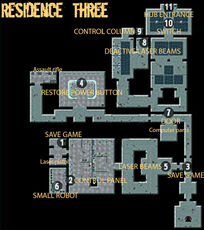 Secret vault residence tree
Add a photo to this gallery
Retrieved from "https://fallout.fandom.com/wiki/Robot_Control?oldid=2739048"
Community content is available under CC-BY-SA unless otherwise noted.