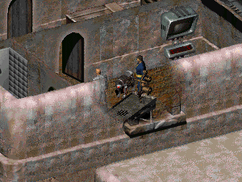 “Either this thing is some horrible stitched together combination of dog and machine or it's all machine, cunningly done to look like a dog. It's hard to tell.”— In-game description

Robodog is a cyberdog and companion in Fallout 2.

A cyberdog, more specifically "cyberhound Mk II personal security model." Dr. Henry brought it from the Enclave Oil Rig and settled down in the NCR. The robodog has stayed there with Henry, not fully functional.

Dr. Henry, afraid that too much information about the Enclave would be obtained from K-9, attempted to destroy the cyborg, but was stopped by Robodog and Dorothy, who suspected what Dr. Henry was planning. The NCR government used the attack as an excuse to confiscate K-9 and cyberdog in order to learn more information about the Enclave as well as what makes the two of them "tick." At last report (and over Dorothy's objections), K-9 and Robodog were disassembled and analyzed. Structural damage during the disassembling is reported to have killed them both.[1]

The Chosen One may acquire this companion in NCR town by assisting Dr. Henry in his mutagenic serum experiment during the quest Test mutagenic serum on a super-mutant. Try Broken Hills.

His stats are inferior to the other cyberdog in Fallout 2, K-9.

Robodog appears only in Fallout 2.

Retrieved from "https://fallout.fandom.com/wiki/Robodog?oldid=3214105"
Community content is available under CC-BY-SA unless otherwise noted.