Fallout 3
“Even I know that was not a nice thing to do. ”

The Robobrain is a type of robot found in the Capital Wasteland in 2277.

This section is transcluded from Robobrain. To change it, please edit the transcluded page.

Although they were considered one of the most advanced cyborgs ever created, Robobrains never reached full production status.[1] Persistent problems with aggression and violence even in properly CODE-conditioned Robobrains caused major problems for General Atomics.[2][3] Until its closure, SAD experimented with developing a new kind of cybernetic brain explicitly designed for use in Robobrains, while RB-2851 focused on manufacturing and iterating on existing solutions. Although the first brains were procured from primates (typically chimpanzees),[4] persistent equipment failure in brain extractors that were incapable of working at an industrial capacity,[5] and flaws in the immature technology used to manufacture Robobrain chassis resulted in a limited trial run. RB-2851 alone managed to complete three batches, with a further two planned. Each batch provided superior upgrades to the robot, including increased energy efficiency, maintaining brain longevity, improved visual cortex connections to enhance motor skills and perception, and tactical combat capabilities.[6][7][8][9][10]

Units deemed combat-capable were assigned on a provisional basis to select locations across the United States, for security and janitorial duties. These included the Sierra Army Depot VI, Mariposa Military Base, and the West Tek research facility on the West Coast and other locations in the East.[11][12] Some private companies closely affiliated with the government did receive a limited number of completed Robobrains for security purposes, like the Vault-Tec Corporation.[13]

This section is transcluded from Robobrain. To change it, please edit the transcluded page.

Developed by General Atomics International with the assistance of RobCo Industries,[14] the Robobrain was designed from the ground up as a multirole platform for use by military and civilian clients. They are more flexible and powerful than robots due to the fact that their central control and processing unit is an actual brain, rather than an artificial facsimile.[2][15] Coupled with a robust, all-terrain tracked chassis and powerful armaments, the Robobrain was on the forefront of a new revolution in combat robotics.

Robobrains are a fairly common sight in the Capital Wasteland. They can be found in many abandoned buildings, in use by groups such as the Enclave and the Brotherhood Outcasts, or even simply wandering the wastes.

There are three variants of the Robobrain. The first, and most common, is the military variant used by the U.S. Army, recognizable by its green paint scheme with a prominent white serial number stenciled on the front. They are more commonly used by various factions. Less common is the gray-colored civilian model, seen wandering the wasteland at random. The Point Lookout add-on introduces the final variant, the Robobrain sentry, which is identical in the appearance to the civilian model but possessing significantly more health.

Robobrains are substantially more durable, accurate, and dangerous than the more commonly encountered Protectron. Armed with a pair of integrated lasers each roughly equal in power to a laser pistol, the Robobrain is a moderate threat, though easy to damage due to its size and extreme vulnerability to headshots. Every robobrain has a combat inhibitor on its back, and if the inhibitor is crippled, the Robobrain will frenzy and attack indiscriminately.

Robobrains also possess a built-in Mesmetron. This attack does not cause much damage, but it may instantly cripple the head of the player character (dealing 1000 damage to the body part) and inflict the concussion status effect, resulting in blurred vision, hindered accuracy, and -4 base Perception. This is used to discourage melee and close-ranged attacks, where the Robobrain is weakest.

The standard Robobrain variant. Usually found roaming the wasteland or in some pre-War buildings, they are often hostile to the player. A few non-hostile Robobrains are also found in Vault 112.

This variant of Robobrain is often found in former U.S. Army buildings, such as Fort Constantine and the National Guard depot, but are also encountered wandering the Wasteland.

A variant of Robobrain used by Enclave forces. Usually roaming the wasteland with an Enclave patrol or in specific Enclave-inhabited areas.

A unique variant of Robobrain found in the St. Aubin medical facility, where they guard and maintain Professor Calvert and defend his facility from intruders.

This Robobrain variant may be encountered patrolling the Capital Wasteland, but are most commonly found in the area between of the National Guard depot and the Scrapyard, accompanied by a few Brotherhood Outcasts.

There are textures for a unique Brotherhood of Steel Robobrain in the game's files, although there are no matching robots in the G.E.C.K.. 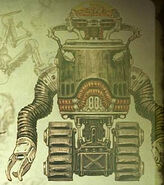