Old World Blues
“Intruder, you will not escape the eyes of my robo-scorpions! Or their pincers!”— Mobius

The robo-scorpion is a special security robot produced by the Big MT research company to serve as robotic guardians for the Big Mountain Research and Development Center. They have a scorpion form with a yellow body, two red pincers, a red tail and green trim along the side of the body and the tail.

The original robo-scorpion was created before the Great War by Dr. Mobius[1][2] and his team in the X-42 robo-warfare facility in Big MT, based on scorpions and powered by a fission battery. They were created for security at the Big Mountain Research and Development Center as robotic guardians with a tail-mounted energy bolt blaster, optical systems allowing anyone in the X-42 robo-warfare facility to see through them with monitors, and a self-destruct sequence which, after their death, causes electrical explosion damage to anyone around. Additionally, their public address systems allow anyone in the X-42 robo-warfare facility to speak through them. According to Mobius, they can form themselves from floor panels along with any other random parts lying around.[3] X-42 giant robo-scorpions, unlike the others, were a project for the US military.[2][4] The entire robot from stinger to pincers is forged from Saturnite and is fitted with atomic laser, but is still susceptible to electromagnetic pulse discharges.[5] Despite several prototypes being requested, certain kinks in design and programming prevented them from reaching battlefield deployment and only one functional prototype was completely finished, remaining idle in the X-42 robo-warfare facility.

Sometime after the Great War, Mobius hacked and altered his colleagues' personalities, chronometers, geometers and more, in response to their burgeoning insanity and cruelty.[6] Disgusted by his own actions against his former friends, Mobius erased some parts of his memory to ease his conscience, including the knowledge of his creations. Later, Mobius relocated to the X-42 robo-warfare facility which he renamed the "Forbidden Zone." There, he began to "re-create" the robo-scorpion, now based on the radscorpions which occasionally wandered into Big MT. He added the suffix "b" onto his new creations and retained all features of the pre-War model. He also took control of the previous models of robo-scorpions, making them his personal army. Mobius now uses the robo-scorpions to constantly distract the Think Tank.

The Think Tank eventually came to see the robo-scorpions as evil minions that Mobius was utilizing in an attempt to steal their intellect and stupefy them as a result of his bio-gel negligence and insanity.[7] The group came to rely on Dr. 0's findings that they drained intelligence, due to lack of actual experimentation and inability to "comprehend Mobius' Robo-Schematics," though the reality was that their self-detonation made him unable to study them.[8][9] Due to this lack of evidence, some did have their doubts on their intellect-draining abilities, seeing them more as nuisances to annoy or irritate them.[10]

The common variants of the robo-scorpion are very durable, being highly resistant to small arms fire and boasting considerable protection against pulse weaponry in comparison to other robots. The unique X-42 giant robo-scorpion is a special model adorned with Saturnite armor plating, making it virtually impervious to small arms fire, but it is vulnerable against pulse weapons.[5] Its tail is equipped with a powerful atomic laser that draws its energy from an internal generator. The laser is capable of causing severe damage and leaving residual radiation of about 30 rads per second for one second, as well as having a blast radius of about 3 yards. It is also equipped with a self-destruct system like other robo-scorpions, but detonates a small nuclear device instead of an electrical explosion. The X-42 giant robo-scorpion's self-destruct explosion leaves radiation of about 15 rads for the first second which decreases every subsequent second, stopping after five seconds.

Robo-scorpions appear in Mk. 1-5 and Mk.1b-5b (data for Mk. 2 and Mk. 2b exist, but both are unused), and come in a pincer, blaster and bomber variants, as well as different sizes relative to their Mark. Their appearance in the game depends on the player character's level and the importance of the location in which they appear.

The normal robo-scorpions without any special attributes.

The fastest robo-scorpions. They can only use their pincers and use melee quickly.

These shoot a long-distance electric blue beam from their tail with an average rate of fire and very high damage.

They have the ability to become invisible due to the Stealth Boy integrated in them.

“I hope I didn't leave my Giant Robo-Scorpion on. That thing eats power like no tomorrow.”— Doctor Mobius

Encountered in the Forbidden Zone dome during the Old World Blues quest, the X-42 giant robo-scorpion is a unique robo-scorpion and Doctor Mobius' ultimate guardian. It is armed with a powerful atomic laser capable of dealing heavy damage and radiation damage of about 30 rads per second for one second as well as having a blast radius of about that of a pulse grenade. It sometimes fires while one is behind cover, and still causes radiation damage, about 2-15 rads per second. 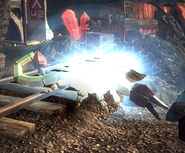 Remains of a giant robo-scorpion in Old World Blues. 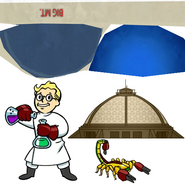