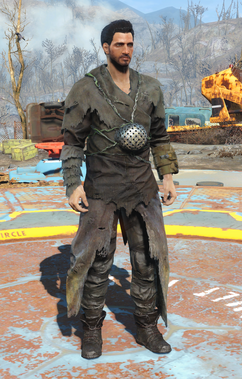 The Robes of Atom's Devoted are a piece of clothing in the Fallout 4 add-on Far Harbor.

This piece of clothing is similar in appearance to the regular rags worn by Children of Atom. Unlike regular rags, it grants 5 Radiation Resistance. It can be upgraded with ballistic weave, but cannot be worn with armor pieces other than helmets.

It also has an unmarked special effect, which grants the wearer increased resistance to radiation, the more irradiated they are. This effect maxes out af 2500 rad resistance, at the expense of having extremely low health, making the wearer practically immune to environmental radiation.

However, this effect changes once the wearer becomes even more irradiated, which can be accomplished by consuming irradiating items such as irradiated blood or durable sludgepak, or by repeatedly loading one fusion cell into and firing the salvaged Assaultron head. Once the player character has surpassed 900 rads, the effects shown in the Pip-Boy do not change, but the player character becomes completely immune to radiation and health can be restored to maximum hit points.

While the effect gets removed by wearing power armor, it can be re-activated (by unequipping and re-equipping the robes) after exiting the power armor, as long as the player character's radiation level is past the trigger threshold.