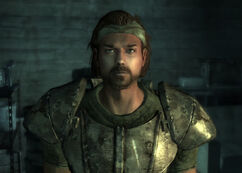 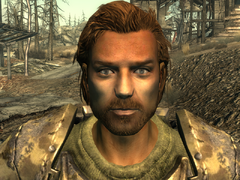 Robert without his bandana

“Just remember I got my eyes on you. We all do.”

Robert is the sentry and doorman of the Family. He is found deep inside the Meresti service tunnel in the year 2277.

Born in 2243, he is Vance's bodyguard. The two met in a fight for their lives against slavers (who Vance detests) well before the Family was formed. Robert saved Vance's life in that battle, and ever since, the two have been good friends. Once Vance formed the Family, Robert began to realize how important Vance was and elected to remain ever vigilant of his friend. He keeps very quiet and usually has to be prompted to get into conversations. He is extremely well versed in the use of firearms and has elected himself as the combat instructor for the Family.[1]

Robert stands behind a wall of sandbags and he will wander the small area between the sandbags and the Family's headquarters.

Robert can potentially cause the Blood Ties quest to fail if one decides to provoke him and kill the Family. After Ian West makes his decision, the Family and Arefu factions are merged, but Robert will remain hostile. If he is killed after this point, the quest will fail.

Robert appears only in Fallout 3.

Retrieved from "https://fallout.fandom.com/wiki/Robert_(Fallout_3)?oldid=3245290"
Community content is available under CC-BY-SA unless otherwise noted.