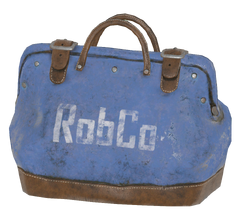 These bags contains several tools created by either Dorothea Dias, Gina Bailey or Greg Goldstein at the RobCo Research Center. The version that is received will depend upon which brain was selected - volatile for Dias, clever for Gina and military spec for Greg.

RobCo tools are given to the player character near the end of the quest Duty Calls.

The miscellaneous item will disappear from the player character's inventory as soon as it is picked up.

Retrieved from "https://fallout.fandom.com/wiki/RobCo_tools?oldid=3466964"
Community content is available under CC-BY-SA unless otherwise noted.