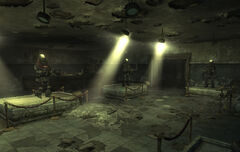 Inside the Lobby of the RobCo Facility

“If there's a way to reactivate and control the robots there, it'd make for a good example of harnessing the past's technology for the book!”— Moira Brown

The RobCo facility is a factory owned by RobCo Industries. It is located slightly northeast of Tenpenny Tower and south west of Fort Independence. The many protectrons scattered across the D.C. area were once manufactured here.

Tinker Joe can be found in the parking lot outside the facility along with his robots, including potential companion Sergeant RL-3. The parking lot is also a random encounter location.

Inhabitants include mole rats, radroaches and protectrons. There are a number of unused protectrons which remain in their charging stations and a few Nuka-Cola vending machines on the various levels.

After installing the mainframe processor, the option to reconfigure the mainframe to stop all the protectrons in the facility from attacking presents itself, as long as the Lone Wanderer has at least 50 Science skill.

Once hacked, the mainframe will have a few options:

The first room has five protectrons on display in various positions. Two will be more specialized and in the spotlights: a Nuka-Cola protectron and a military-issued protectron. The other three are standard protectrons. Two rooms on the left are restrooms. To the northwest there's a small room with two storage closets with minor loot and ammunition. To the right of the entrance are two paths. The left path going to a room with a few lockers and shelves that then leads to a larger room which seems to be a small part of the assembly line for the robots. To the right from coming through the entrance is a much smaller room with a workbench. After this room are some stairs that lead to overlooking the previous large room. The right path is simply a winding flight of stairs that also leads to overlooking the large room.

When entering this room, there will be two pool tables, with the right one having a couch on top of it. There are two Nuka-Cola fridges, and one regular refrigerator to the right. If heading to the left from this room, there will be a long hallway. Going through the hallway there should be a mannequin, along with three ammunition boxes. A little further down, there's a gate with a leaf blower and two lawn mower blades. Right before the hallway ends there is a room to the left. In there is a first aid box and not much else. Going straight from the first room is a small cafeteria with four tables on the right. Continuing from this room one can go straight or turn left. To the left and another left there is a small room where the first hallway ended and past that there is another room with minor caps and loot. Turning left and then going straight leads upstairs. If heading right from the original room, there will be a short hallway with restrooms on either side. Past that there is the office with four office spaces with minor loot. From there there's a hallway with three rooms on the sides. The first looks like an office/storage area. The second room is a larger office with four desks and file cabinets. The last room is again an office/storage area with several boxes and a first aid box. Now continuing upstairs it makes like a trident pattern. The left path there's a storage closet and past that is a small monitor room with two lockers. The right path is the same but a bit more destroyed. The storage closet is caved in and the monitor room messed up. Lastly, continuing straight from the stairs is the main computer room for the whole building. There's a first aid box, a pre-War book, and a Stealth Boy in there.

RobCo facility appears only in Fallout 3.

Immediately after entering the door to the cafeteria area from the factory floor, you'll notice, in the pod to the left, that the protectron's arms slowly move down to its sides, even though it's supposed to be deactivated. [verified]

D.C. Journal of Internal Medicine
Add an image to this gallery
Retrieved from "https://fallout.fandom.com/wiki/RobCo_facility?oldid=2905399"
Community content is available under CC-BY-SA unless otherwise noted.