See all:
“Did you know that the Vault-Tec/RobCo partnership is considered the most successful joint venture in the history of American industry?”— Vault 101 PA System

RobCo IndustriesTM was a multibillion-dollar robotics and software corporation founded by industrialist and technologist Robert House.[1][2]

Founded on June 25, 2042, House's company developed a wide range of robotic products including the eyebot, protectron, and sentry bot[1] as well as the Stealth Boy Model 3001 Personal Stealth Device.[3][4] RobCo invested in exhibits for the public, such as the joint RobCo/General Atomics exposition at the Museum of Technology in Washington, D.C.[5]

RobCo acquired REPCONN Aerospace after a year of buying shares from 2075 to 2076, despite the long-time CEO's efforts to stop the acquisition.[6][7][8][9] House utilized the newly acquired company for a weapons research program for Colonel Moretti of the US military, repurposing REPCONN's proprietary plasma rocket propulsion system.[10][11] H&H Tools factory, part of the inheritance Anthony House had stolen from his brother Robert, was acquired by way of RobCo aggressive trading practices.[12]

RobCo Industries was first mentioned in the first Fallout as the developer of the Pip-Boy. The company's history and products have been expanded upon in subsequent Fallout games. 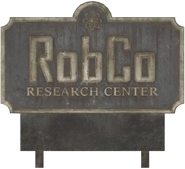