RobCo Fun is a perk magazine and holotape series in Fallout 76.

RobCo Fun is a pre-War computer magazine series produced by RobCo Industries. Each issue comes with a holotape game. Despite the Robco branding on the magazines, the games themselves are products of various studios such as Planned Diversion Programming and Hubris Comics Game Studio. The cover art depicts imagery advertising the particular game it is bundled with. The art work is not indicative of gameplay. Issues of RobCo Fun cost $40.

Issues of RobCo Fun are affected by Pannapictagraphist and will emit directional audio when the player is in range.

Many of the Robco Fun magazines in Fallout 76 share identical titles and cover art to their Fallout 4 counterparts. For these magazines, The Art of Fallout 4 has clean versions of the cover art which include a visible issue number. 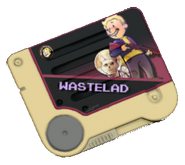 Automatron
Add an image to this gallery
Retrieved from "https://fallout.fandom.com/wiki/RobCo_Fun_(Fallout_76)?oldid=3149569"
Community content is available under CC-BY-SA unless otherwise noted.