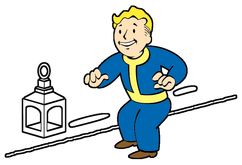 There are multiple places to acquire this quest, specifically in Diamond City and Goodneighbor. It can be acquired from listening to the Join the Railroad holotape that can be found lying around, overhearing a conversation between two residents of Diamond City near Valentine Detective Agency, talking to Diamond City security inside Diamond City, or by speaking to NPCs who mention the Railroad over the course of the main story (such as Piper and Amari). Any of these actions will trigger the objective to 'Follow the Freedom Trail' to be added to the Pip-Boy, proceed to Boston Common to find the beginning of the trail. Talking to the tour bot will provide additional information but is ultimately unnecessary.

Follow the distinctive red trail of bricks in the ground from location to location. The red line on the ground is largely unbroken but there are a few stretches that are obscured by debris. In these places, the trail is "improvised" using trails of red paint across the street or along with the wreckage of buses and walls. The trail will take the Sole Survivor past several Bostonian landmarks and historical sites, each with a "Freedom Trail" seal outside in the sidewalk, with a letter circled and a number added in red paint. The first seal ("7A") is at Boston Common right near the tour bot. The second seal ("4L") is in front of the Massachusetts State House. The third seal ("2A") is at the entrance to the Old Granary burying ground. The fourth seal ("6O") is near the entrance to Goodneighbor (the Old State House from pre-War Boston's perspective). The fifth seal ("3I") is in front of the Old Corner Bookstore. The sixth seal ("5R") is at Faneuil Hall. The seventh seal ("8D") can be found in front of the Paul Revere House. The eighth and final seal ("1R") can be found at the Old North Church, the end of the trail. Following the Freedom Trail isn't mandatory, the Sole Survivor can travel directly to the Old North Church if they already know its location.

Inside the Old North Church, kill a handful of ghouls and follow the lantern painting to find a way down into the catacombs. At the end of the catacombs, there's another Freedom Trail marker with a ring that spins, similar in appearance to the eight seals on the trail. Rotate the outer wheel clockwise and counterclockwise to align the letters with the arrow and press in the center to input the letter. Spell the word "RAILROAD" one letter at a time to open the secret door. The word must be spelled without mistakes. If any mistakes are made, the word must be restarted from the beginning.

Once the door opens and is entered, a blinding spotlight will be shone at the Sole Survivor as they are confronted by the leader of the Railroad, Desdemona, and two Railroad agents, Glory and Drummer Boy, who have their guns readied. Speak with Desdemona - the conversation options will have no effect on the Sole Survivor's future relationship with the Railroad. Eventually, Deacon will enter and vouch for the Sole Survivor, listing two of their major accomplishments in the Commonwealth. Desdemona will ask some further questions including why the Sole Survivor has come to the Railroad, if they know what a synth is, and most importantly if the Sole Survivor would risk their life to save them from their plight. After the questioning is done, the quest completes and Tradecraft starts immediately.

Freedom Trail markers
Add a photo to this gallery
Retrieved from "https://fallout.fandom.com/wiki/Road_to_Freedom?oldid=3416032"
Community content is available under CC-BY-SA unless otherwise noted.