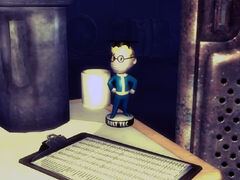 The Intelligence bobblehead on the table

“She`s certainly head and shoulders above most everyone else around here. Though that`s not saying much.”— Anna Holt

The Rivet City science lab is the laboratory of Rivet City and working place of Dr. Madison Li and her team. Much of their research involves hydroponics and the growing of healthy produce like fresh apples and fresh potatoes. They are also researching a portable power supply, which is later used by the Brotherhood of Steel after the Enclave stops the relaunch of Project Purity.

The science lab was established after the discontinuation of Project Purity as a place for Dr. Li and her colleagues to pursue their research.

The science lab has three entrances: two from the midship deck (one leads to the common room, the other leads to a hallway and the Capitol Preservation Society), and a door connecting the science lab to the upper deck. All three entrances are upstairs, with the midship deck doors being in the southeastern part of the lab, side by side up the stairs. The upper deck entrance is on the northeastern side, up the stairs, behind three water/grain silos.

The main point of interest is the center room downstairs, where a large intersection of pipes take up some of the space in the room, leading down into a large circular platform (which could be a purifier or filter). A large piece of machinery (possibly a purifier) is beside the platform on the right.

In the very center of the room most of the center's occupants (such as Doctor Li, Anna Holt and others) reside. There are three tables holding chemistry sets, vegetables and other various miscellaneous items. On the left of the tables is a refrigerator and on the right are two lockers.

The Rivet City science lab appears only in Fallout 3.