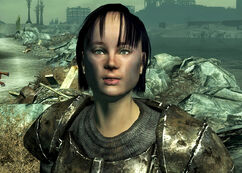 “Welcome to Rivet City. Please wait while the bridge extends.”

Rivet City guards are members of the security team at Rivet City.

These guards patrol Rivet City to ensure the security of the ship. They also help secure the purifier at the Jefferson Memorial.

Rivet City guards appear in Fallout 3 and one appears in its add-on Mothership Zeta.

Retrieved from "https://fallout.fandom.com/wiki/Rivet_City_guard?oldid=3245795"
Community content is available under CC-BY-SA unless otherwise noted.