Rivet City is a city located inside a decaying aircraft carrier in Washington, D.C., in 2277. It is the largest settlement in the Capital Wasteland.

Before the war, the ship that ultimately became Rivet City was a massive, dry-docked aircraft carrier.[Non-canon 1] Starboard aircraft elevators allowed for easy stowage and deployment of these aircraft from the sizable hangar located below the deck. In addition to a sizable fleet of fighters, the carrier was also equipped with desalinization facilities and onboard hydroponic farms.[1] However, the ship was abandoned in the wake of the Great War. Since then, the bow section has crumbled, allowing mirelurks to infest the ship's lower sections.

Around 2237, remnants of the Naval Research Institute under the leadership of Horace Pinkerton were looking for new lab space and found the ship, establishing the Rivet Station Science Outpost after clearing out the mirelurks.[2] For years to come they would use the intact science bay as the nucleus of their science efforts.[2]

By April 2239, a burgeoning civilian settlement sprung up around the station on the carrier.[3] As a result, on April 25, Rivet City was formally established by Pinkerton, Annette Holmes and Brad Danvers to better protect and organize this growing community.[4] Governance of the city was relegated to a three-person council, staffed by one representative from each group on board the ship including scientists, civilians, and security personnel.[5]

The settlement prospered and Pinkerton held his seat on the council as science officer until 2258 when Madison Li and her science team arrived at Rivet City after abandoning Project Purity.[6] Li took over Pinkerton's science teams, with the prospect of reactivating Project Purity as an incentive.[6] Furious, Pinkerton left the city into self-imposed exile in the broken-off bow.[6] Pinkerton shares his frustration with the shift in focus preventing work on more meaningful projects, such as defensive systems or making the carrier seaworthy.[7]

Its inhabitants live in individual rooms and enjoy relative safety and security inside the aircraft carrier. A number of guards rotate 24 hours a day to protect the ship from raiders, super mutants, mirelurks and any other threats to the city and its inhabitants. Rivet City includes a shopping area, as well as an American history museum, science lab, church, clinic, bar and hotel.

Rivet City is also a supplier of edible, non-irradiated food in the Capital Wasteland, trading it for essential raw materials with other communities.[8] Its scientific prowess is thanks to its aggressive reclamation efforts: anything useful is snatched up and brought to the City.[9] Attempts at instituting a bridge tax or exploiting their position by raising prices on exports (such as fresh produce by 50%) were repeatedly voted down, keeping the city open to traders and outsiders and fostering a healthy population level.[5] However, it refrains from recruiting scientists from outside settlements, such as the Underworld or Tenpenny Tower, as the vote proposed failed.[5] The security force is trained in combat by veterans Lana Danvers and Harkness and equipped with military-grade combat armor alongside automatic weapons.[8]

Challenges facing the settlement include respiratory ailments among city residents caused by rust and the need for constant maintenance.[10] The science lab and hydroponic farms also require resources and oversight.[5] In addition, a social class system causes conflict, with two distinct groups including the hangar deck and upper deck citizens.[Non-canon 2]

Following the conclusion of the conflict and the activation of Project Purity, Rivet City gained prominence as the Brotherhood of Steel's first trading partner. In return for a share of weapons and other technology salvaged from the Enclave, the Rivet City police force provided protection for water caravans the Brotherhood could not protect themselves.[11] The exchange was mutually beneficial at first, but the increased number of caravans eventually stretched Rivet City's military power to its limits, especially as raider attacks became more organized due to the leadership of Split Jack.[12] Eventually only one in four caravans made it back intact, quickly draining Rivet City's resources and ranks of veteran security officers.[13][14] The losses caused by the raider attacks have led to officers in charge questioning Lyons' policy of giving the water out for free, instead of selling it so that caravan drivers can use the markup to pay for protection.[15]

Rivet City lies in the most southeastern part of the map, near Anacostia. It can be reached by following the eastern side of the Potomac River, crossing near the tepid sewers or at the Citadel or by swimming across from Arlington Library. It is also a short walk from the Jefferson Memorial.

On the steel structure across from the aircraft carrier itself (near Carlos the beggar), there is an intercom box that must be used to extend the bridge. After a brief conversation with Harkness, the chief of security, he will grant entry to Rivet City.

Northwest of Rivet City is a super mutant camp. There may be super mutants and sometimes a captive that can be rescued. There is a Lying, Congressional Style skill book by some sleeping mats near several boxes of ammunition. South of Rivet City, there is a shipwrecked boat surrounded by radioactive waste. The boat contains ammo boxes and a locked first aid box.

When the player character gets to the upper deck of the carrier, they can get a look at the aircraft that still remain. These are the same fighter jets that are used in the Operation: Anchorage add-on. The exterior doors in the bridge tower lead to catwalks on the outside of the tower, most of which have either an ammo box or a first aid box.

The broken bow of the ship was separated from the main carrier hull and half-flooded. The lower levels are inhabited by mirelurks or mirelurk hunters (depending on level), while the upper levels contain Pinkerton's laboratory and home. Pinkerton has set up numerous traps throughout the bow, such as rigged shotguns, frag mines, a gas leak and a rigged terminal placed near the heavy door to Pinkerton's lab. 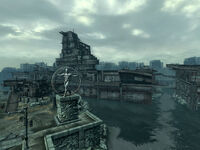 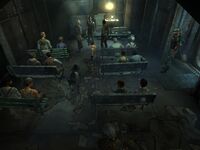 Saint Monica's Church, A Nice Day for a Right Wedding 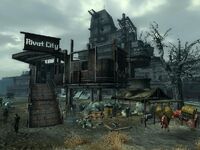 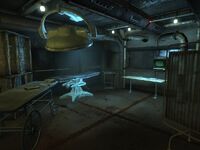 Motorcycle found near the exit next to Gary's Galley 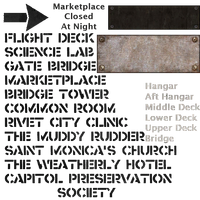 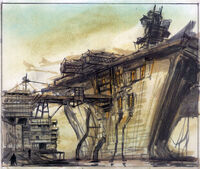 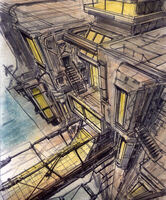 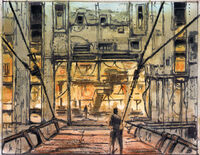 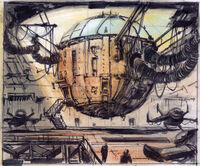