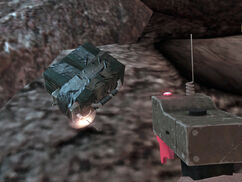 Plant the mining explosives in these spots

“Fighting so many at once is a dangerous prospect, unless you are a truly mighty warrior. This many so close together suggests a nest nearby - if we find it and destroy it, we might have better luck.”— Waking Cloud

From Pine Creek, the Courier can either enter the nearby cave to set explosives and close off the entrance, or kill the yao guai outside the cave. The cave option does not require combat. Completion of either option ends the quest successfully, and the particular method chosen has no effect on the rest of the game.

If opting to collapse the cave entrance, the cave must be entered. From here, the cave may be explored, and three marked positions on the floor (that look like transparent "mining explosives") mark where the explosives must be placed. The "mining explosives" are not traditional "items" that can be carried; instead, they are a part of the cave and only need to be enabled. They are visually identical to C-4 plastic explosive. There are three yao guai in a central area of the cave, but killing them is not a requirement for this quest as they can be avoided while placing the explosives. When all three explosives are set, the Courier should exit the cave and trigger the mining detonator, sealing the cave and completing the quest.

If the Courier chooses to kill the yao guai outside the cave, they can simply follow the map markers to the targets and dispatch them. Once all of the target yao guai are killed, the quest is complete.

If the explosives are planted in the cave without triggering them, and then the yao guai are killed at Pine Creek, the quest will be compromised and cannot be completed.[verified]