The ritual bindings and ritual mask are an outfit set in Fallout 76.

The ritual bindings were designed by the Cult of the Mothman and consist of brown rags tied around the wearers arms and legs.

The ritual mask is headgear used by the Cult of the Mothman in Appalachia. It consists of a brown headwrap, tied together with a decayed human skull used as a mask and two antlers on either side of the head. 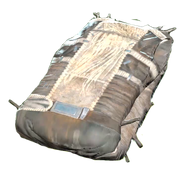