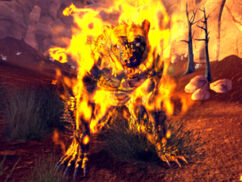 Put Ghost of She to rest

“Drink. Tea is strong. Tea is bitter. Wisdom is strong. Wisdom is bitter. You see? You go to cave. Find Ghost of She. Lay ghost to rest. This your quest. Bring peace where was strife. Go!”— White Bird

Rite of Passage is a side quest in the Fallout: New Vegas add-on Honest Hearts.

The Courier can begin this quest by asking Waking Cloud about her yao guai gauntlet. She tells them to speak to White Bird, and marks White Bird's cave on the Pip-Boy map.

When speaking to White Bird, he will tell them to return to him with 3 sacred datura roots. The roots can be found along almost any road or riverbank in Zion Canyon. The Courier can also buy the roots from Joshua Graham when they first encounter him, or pick them from along Utah State Route 9 between the old Rockville Bridge and the North Fork Bridge. It is possible to find some roots in the cave's sacks, but the contents are randomized so there are not three guaranteed samples.

After the roots have been collected, White Bird will offer to make a tea from them, giving the Courier the option of accepting or declining if they are not ready. Be aware that if the tea is consumed, the screen will become blurry and strangely colored until you complete the entire quest. After drinking the tea and its effects are felt, White Bird will tell the Courier to kill the Ghost of She and bring back its paw, and will mark the Ghost Den on the map. If the Courier speaks to White Bird again, they can ask about the Ghost of She, and he will say to speak with Waking Cloud. After asking Waking Cloud about it, she will tell the Courier the tribe's story of the beast.

To reach the Ghost Den, follow the river back out of the Narrows. After reaching Caterpillar's Mound, follow the river east. After a bit there is a pathway that leads to the Vault 22 dwellers' guard camp. Take care on the way to the Ghost Den, as giant spore plants, spore carriers and cazadores may be found along the way near the camp, and the den itself contains several Yao guai cubs and/or giant yao guais. After travelling far enough into the Ghost Den, the Ghost of She will appear as a giant flaming yao guai. Upon reaching the Ghost of She, a flash of light will blind the Courier. When her health drops to half, she will divide into four copies of herself. Once the original is killed, the other three will disappear. One way to figure out the original is to go into V.A.T.S. and check which one has the highest health. After defeating the bear and looting its corpse for the paw, travel back to White Bird. The hallucinogenic effects will be removed from the screen, and the Courier will be rewarded with She's Embrace and a level-dependent amount of XP.

A rite of passage is a ritual event that marks a person's progress from one status to another, usually the transition to adulthood.

Sacred datura root near the Half Mouse cave

Near a bridge at the Stone Bones cave

Sorrows camp on a ledge

Going through the Rite of Passage

Visual effect of the Rite of Passage

Fighting yao guai is tough with a blurred vision

Ghost of She, kill her and take her paw to White Bird
Add a photo to this gallery

Retrieved from "https://fallout.fandom.com/wiki/Rite_of_Passage_(Honest_Hearts)?oldid=3008004"
Community content is available under CC-BY-SA unless otherwise noted.