The Ripper™ vibroblade is a pre-War brand of hand-held chainsaws, developed as a portable engineering tool for commercial and military uses.

The Ripper™ vibroblade is a small, handheld, militarized chainsaw that saw extensive use in the armed conflicts before the Great War,[1] with a commercial-grade, scaled-down version made available for the general market.[2][Non-game 1] The first Ripper was powered by small energy cells,[3] though later models were self-powered. It can saw through both flesh and metal alike with ease.[3][4]

This Ripper, a Ripper™ vibroblade is trademarked as Ripper™, and charged from small energy cells.[3][4] There are a number of steel teeth that rotate extremely fast, but only for a short period of time due to excessive energy consumption. This allows the Ripper vibroblade to easily cut through flesh and bone. A smaller, more portable version also exists.

A hand-held, militarized chainsaw, popular with Army units requiring a compact engineering tool for cutting. Just what material is intended to be cut with the weapon remains open to debate. Two distinct models exist: A battery-powered variant with distinct teeth and pressurized gas-powered version using a chain.[1] A commercial-grade, scaled-down version was also made available for the general market.[2]

A portable, industrial-grade vibroblade in yellow and black, this Ripper model featured a safety catch and a heavy duty non-slip grip of black rubber, made to ensure the weapon does not slip from the operator's hand. An unnamed self-powered model of the Ripper with smaller teeth, resembling a large kitchen knife. Like the Military Ripper, it also has unlimited power, and can even be superheated to increase damage.

A larger, two-handed version of the Ripper, resembling an enormous claymore sword. Like the small teeth Ripper, it requires no recharging and can be superheated to increase damage.

In the Fallout demo it was simply known as "Vibro Blade."[5] 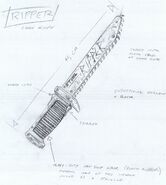