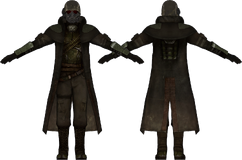 The riot gear and the matching riot gear helmet are pieces of armor in the Fallout: New Vegas add-on Lonesome Road.

An advanced design fielded in limited quantities before the Great War, riot gear was a specialized model of combat armor used by the United States Marine Corps,[1] Army units in the American West,[2] and select law enforcement agencies, such as the Los Angeles Police Department.[3]

The most characteristic element of this model is the helmet. A rounded shell protects the head from incoming gunfire, while the lamps on the right side of the helmet (including infrared and visible light projectors) provide illumination.[4] The armored mask designed to be worn with the helmet is necessary to use the IR lamp, due to the low-light optics integrated into the lenses.[5][6] The mask also incorporates a locking mechanism to properly join it together with the helmet shell, ear covers with membranes that do not inhibit hearing while maintaining its protective qualities, and air filters. Some upgraded models also include communications gear and upgraded filtering apparatus.[7]

The torso assembly is a flexible vest of rigid impact plates, worn with adjustable straps on the sides and shoulders. One of its most notable additions is a prominent throat protector mounted on the vest, used by military operators to display tactical numbers[8] or the owner's identifying information, such as the name, rank, and blood group, allowing for easy casualty management.[9] Later models of riot gears may include heavier protection, including armored plating on shoulders and forearms. Military coats designed for use with the armor will also typically include some form of bullet-resistant reinforcement.

The helmet gives the "Red Eye" effect, which gives low visibility sight while in sneaking between 6:00 PM to 6:00 AM or while indoors. This will toggle from on to off upon leaving sneak mode. 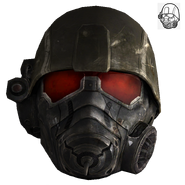