Ringo's caravan is an unmarked location in the Mojave Wasteland, located northeast of Jean Sky Diving.

A week before the Courier arrives in Goodsprings, the Powder Gangers led by Joe Cobb ambushed this Crimson Caravan Company enterprise on its return trip to the New Vegas branch.[1]

The Powder Gangers killed the two guards and their pack brahmin. Ringo, the head of the caravan, managed to thin their numbers and fled, escaping to the nearest safe haven he could: Goodsprings.[2] Since then, the town has been hiding him, not thinking that the men attacked him would come looking for him.[1][3][4]

The caravan is now just a hitched camper in the middle of I-15 with the bodies of the two guards and the pack brahmin strewn around it and its supplies raided by the Powder Gangers.

None of the dead caravan guards appear. [verified] 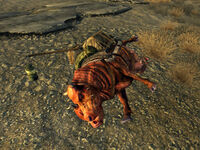 One of the dead brahmin