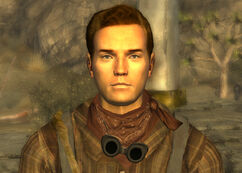 “I'm not from Goodsprings. I'm a trader with the Crimson Caravan Company.”

Ringo is a trader for the Crimson Caravan hiding out in Goodsprings in 2281.

About a week before the Courier awakens from their unconsciousness[1], Ringo, a trader of the Crimson Caravan Company[2][3], retreated to Goodsprings explaining that his caravan had been attacked[4], east of town on the I-15 close to Jean Sky Diving.[5] With the permission of Trudy, the local bartender, the caravaneer's been holding up at the abandoned gas station lying low ever since expecting the worst to hunt him down and Goodsprings to just hand him over. Because of this, Ringo has been on edge since.[6][7]

Ringo was right as the worst did come looking. Joe Cobb, a small-time Powder Ganger leader of around dozen gangers,[8] has come to Goodsprings looking for revenge, threatening to burn the town down if they don't turn him over. Trudy shooing him off soon afterward.[9] Ringo isn't particularly afraid of Joe Cobb but is worried about the gang he leads and is trying to get by without Joe Cobb bringing the rest of his gang to Goodsprings and getting thrown to the wolves.[10]

Retrieved from "https://fallout.fandom.com/wiki/Ringo?oldid=3322867"
Community content is available under CC-BY-SA unless otherwise noted.