“Legal tender for the world of the wastes.”

Ring pulls are a currency in Fallout Tactics.

Ring pulls are used as currency by people in the area of Chicago. They are tabs from soda cans. Ring pulls can be found all over the settlements in early missions and traders will accept them. There are usually some outsider traders in Brotherhood bases who will accept ring pulls as well.

Ring pulls and Brotherhood scrips have the same value.

In reality, the ring pull was only introduced for soda can use in 1975. Prior to this time the most common mechanism to open a soda can would have been the "pull-tab" (or "pop-tab") introduced in 1964. Before that, cans would have been "flat-top" and opened by puncturing two holes into it using a can opener.[1] 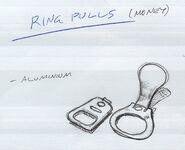 Ring pulls can be found on the floor in Fallout 4, although they aren't used as currency in the Commonwealth.
Add an image to this gallery

Retrieved from "https://fallout.fandom.com/wiki/Ring_pull?oldid=3341945"
Community content is available under CC-BY-SA unless otherwise noted.