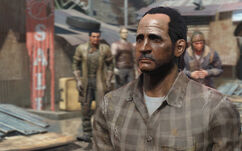 Talking to Riley after his brother has been killed.

Riley is a resident of Diamond City in 2287.

Riley is an ordinary resident of Diamond City. His brother, Kyle, is paranoid about synths invading the Commonwealth and suspects that Riley may be one himself.

Riley appears only in Fallout 4.

Retrieved from "https://fallout.fandom.com/wiki/Riley_(Fallout_4)?oldid=3426564"
Community content is available under CC-BY-SA unless otherwise noted.