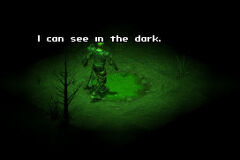 “You're not afraid of the dark, are you?”

Riddick is a special character that can be recruited in Fallout Tactics after the Warrior completes a mission with him.

Riddick is a criminal on the run from all sorts of people and authorities, but exactly who he refuses to mention. While he is happy to fight other humans, he prefers to try out his exceptional night vision on the lethal critters of the wasteland.

Riddick should become available after the Warrior reached the rank of Junior Knight, and after they met him in the Pitch Black special encounter. After the mission, he is recruitable in the Gamma bunker.

Riddick appears only in Fallout Tactics.

Riddick is a reference to Richard B. Riddick, the main protagonist in the Chronicles of Riddick science fiction series. His appearance and abilities are much the same; including Night Vision. The encounter title Pitch Black is a reference to the first film in the series, in which Riddick combats nocturnal alien monsters during a solar eclipse on the planet where the ship transporting him had crash-landed.