Increased chance for enemy fire to ricochet back to them, killing them instantly. Dependent on HP level closest to 0.

Gain an increasing chance to deflect back some of enemies' ranged damage. (No PvP)

Automatically kill a nearby enemy after killing one 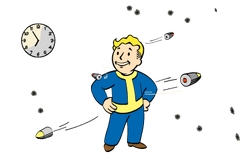 “What goes around comes around!”

Ricochet is a perk in Fallout 4, Fallout 76 and the Fallout: The Board Game expansion Fallout: New California.

Ricochet is added to the board game with the Fallout: New California expansion. After killing an enemy in combat, the player character can discard this perk card to kill a second enemy within three spaces of the first one.

Loading screen slide
Add a photo to this gallery
Retrieved from "https://fallout.fandom.com/wiki/Ricochet?oldid=3428777"
Community content is available under CC-BY-SA unless otherwise noted.