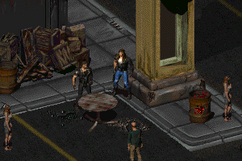 “Me hit people with fists like playing drum.”— Rico

Rico is the loyal bodyguard of Three-Card Monte, a local conman. He isn't very sociable and is evidently unintelligent, speaking in grunts and very simple sentences.

Rico was cut from Fallout 2.

Retrieved from "https://fallout.fandom.com/wiki/Rico?oldid=3348847"
Community content is available under CC-BY-SA unless otherwise noted.