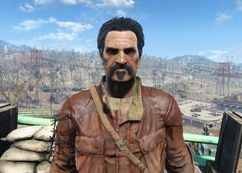 On the highway west of Lexington

Ricky Dalton is a Railroad informant operating in the Commonwealth in 2287.

Ricky's extensive knowledge of Boston and the outlying landscape had earned him the watchful eye of Railroad operatives. He had been under observation for eventual recruitment into the organization, because Ricky's skills meant that his potential for helping keep tabs on sights of interest and feeding important intel would be beneficial to the Railroad's cause.

Recently, Ricky has been trailing the elevated highway west of the city of Lexington, monitoring the local Slocum's Joe coffee shop through a pair of binoculars. The restaurant conceals a now-abandoned military intelligence bunker, designated "The Switchboard," the Railroad's previous headquarters. The base has now fallen under the control of a group of synth troopers, deployed by the Institute. The synths have placed landmines, installed automated machine gun turrets and fortified the compound in order to prevent the reclamation of the compound by the Railroad.

Ricky Dalton appears only in Fallout 4.

Retrieved from "https://fallout.fandom.com/wiki/Ricky_Dalton?oldid=3256313"
Community content is available under CC-BY-SA unless otherwise noted.