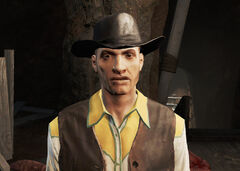 Ricky Braxton is a deceased character in Nuka-World in 2287.

Ricky Braxton was one of the original settlers of Nuka-World prior to the arrival of Colter's gangs. The Nuka-World raiders ended up forcing Ricky and the other holdouts to take refuge in the Mad Mulligan's Minecart Coaster attraction in Dry Rock Gulch, not knowing about the bloodworm infestation in the attraction. The Sole Survivor can find his body inside the attraction, with his last words recorded in his note.

Ricky Braxton appears only in the Fallout 4 add-on Nuka-World.