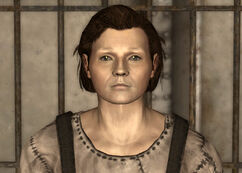 Rick Lancer is a prisoner of the Fiends in Vault 3 in October, 2281.

Part of a caravan heading into New Vegas, he along with the rest of the survivors (Carter, Dennis and Rachael) were taken prisoner by the Fiends. They were taken to Vault 3 to be held for ransom, however unbeknownst to the Fiends, anyone who would be willing to pay such a ransom died in the attack. Thankfully the Fiends' haven't found this out, otherwise they would've just killed the rest of the prisoners. During their imprisonment one of their own, Carter, managed to escape and explore the Vault before being captured and brought back to the holding cell. Although Carter would die in that pen, the password he hacked and the weapons he found was relayed to Rick.[1] Rick with this information, along with the information that they keys for the cell on a fiend named Daniel, will offer it as an incentive to the Courier to help them escape.[2][3]

He will tell you that his friend Carter snuck out of the cell and went exploring the vault and found a password for a room filled with weapons and he was heading there before he was killed by the fiends.

Retrieved from "https://fallout.fandom.com/wiki/Rick_Lancer?oldid=3178613"
Community content is available under CC-BY-SA unless otherwise noted.