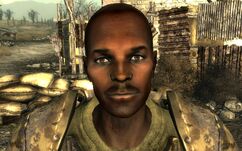 “What? I guard the gate. That's all. What the fuck do you want from me?”

Richter is a slaver at Paradise Falls in 2277.

Richter guards the entrance to Paradise Falls. He wanders around the general area of the entrance and can occasionally have conversations with Grouse, who is sitting nearby.

Richter appears only in Fallout 3

Richter guarding Paradise Falls
Add a photo to this gallery
Retrieved from "https://fallout.fandom.com/wiki/Richter?oldid=3329703"
Community content is available under CC-BY-SA unless otherwise noted.