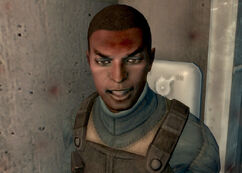 Escape!
Trouble on the Homefront

“What have you done? The Vault is done for!”

Originally, if he was left alive in Escape! he would appear in Trouble on the Homefront.

Officer Richards appears only in Fallout 3.

Retrieved from "https://fallout.fandom.com/wiki/Richards_(Vault_101)?oldid=3235143"
Community content is available under CC-BY-SA unless otherwise noted.