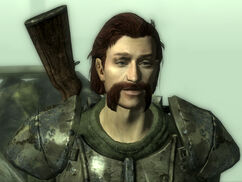 “...Today, with the consent of my father, I am to be shot and killed on the cliffs of the old Cathedral by the hands of my brother Richard.”— John Adlam, Smuggler's confession

Richard Adlam is a smuggler in Point Lookout in 2277.

Richard Adlam is tasked with the job to kill his brother, John Adlam, for stealing from his family's claim.

Attempting to speak with him via using the console to get to where he is will cause the character to zoom in and then zoom back out, with no interaction from him.

Richard Adlam appears only in the Fallout 3 add-on, Point Lookout.

Retrieved from "https://fallout.fandom.com/wiki/Richard_Adlam?oldid=2212441"
Community content is available under CC-BY-SA unless otherwise noted.