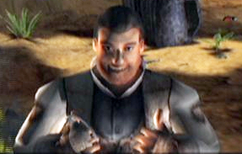 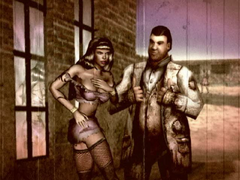 Richard with Ruby in the intro cutscene

“Well... I guess you're the stranger everyone's talking about. Somehow I expected more. I'm Richard, the mayor of Carbon. I appreciate your help in dealing with the raiders, but it can only lead to more trouble.”

Richard is the mayor of the Texas town of Carbon in 2208.

He is the one who becomes a link between the townsfolk and the local raider gang, keeping both sides at least partially satisfied. Raiders get the slaves and supplies they need, while citizens mostly remain alive. When the Initiate arrives, he begins to despise the mayor's activities.

Later, the mayor decides to help the raiders kill the Initiate, who had recently defeated a group of them in the bar. In doing so, Richard hoped raiders would spare the citizens, and that things would generally remain the same. Richard knew the Initiate was looking for Brotherhood paladins, so he lied, telling the Initiate that they were going into Carbon crater.

When the Initiate made it to the bottom of the crater, Richard had already been waiting for him here, along with a bunch of raiders. Despite the raider's aid and great amount of explosives Richard used against the Initiate, he was ultimately shot. While dying, all the explosives he still had in his pockets detonated, blowing him to pieces and triggering the crater to collapse. [1]

Despite Richard's attempts to protect Carbon by killing the Initiate, the raiders ignored him and attacked the town.

Richard the mayor appears only in Fallout: Brotherhood of Steel.

Retrieved from "https://fallout.fandom.com/wiki/Richard_(Fallout:_Brotherhood_of_Steel)?oldid=3462052"
Community content is available under CC-BY-SA unless otherwise noted.