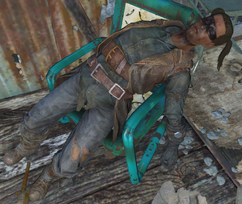 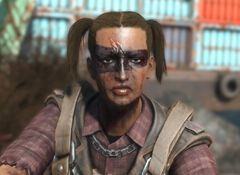 Ricca is a deceased raider in the Commonwealth in 2287.

Ricca was a member of a raider gang at College Square that extorted money from travelers and caravans, alongside Erris and Tad. At some point, she took over the gang and drastically raised the tolls, as outlined in her toll schedule. While Erris considered her a poor leader,[1] others were impressed by her strength and sought to join her.[2]

At some point prior to the Sole Survivor's arrival, College Square was overrun by feral ghouls, killing Ricca and her entire gang.

Ricca appears only in Fallout 4.

Retrieved from "https://fallout.fandom.com/wiki/Ricca?oldid=3176912"
Community content is available under CC-BY-SA unless otherwise noted.