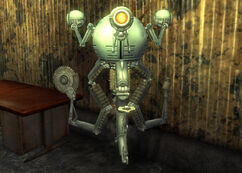 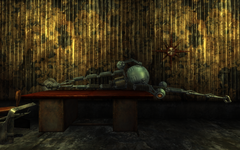 “Hello. Could you please direct me to mistress Tabitha?”— Rhonda when repaired

Rhonda is a deactivated Mister Handy found in the Black Mountain storage building in 2281.

Rhonda was Tabitha's best friend before the super mutants came to Black Mountain.

In 2275, Rhonda shut down, likely a self-defense mechanism as a result of suffering catastrophic damage, and was left inside the Black Mountain Storage Building. Raul Tejada eventually made his way to Black Mountain after he no longer heard the broadcasts being transmitted, and was soon made a captive by Tabitha. He was tasked with fixing Rhonda, and while he was able to handle the mechanical issues, he lacked the competence for the programming problems of the robot. This, in turn, prevented Rhonda from being activated and caused Raul to be imprisoned indefinitely.

Crazy, Crazy, Crazy: Reactivating Rhonda requires a Science skill of 60. If the Courier reactivates Rhonda and leads her to Tabitha, they will complete the quest, as Rhonda and Tabitha wander off together.

According to Mikey Dowling, before recording dialogue for Tabitha and Ronda, voice actor Fred Tatasciore silently read through the entire script once before declaring that he was ready. He then read the script from top to bottom, "effortlessly" flowing in and out of both characters, making it one of Obsidian's favorite recording sessions.[1]

When Rhonda and Tabitha travel together from Black Mountain after the end of the quest Crazy, Crazy, Crazy, the duo may pass down a steep incline that may cause Rhonda's robot body parts to glitch out. The game will then constantly attempt to rebuild the character with eventual success.[2]

Retrieved from "https://fallout.fandom.com/wiki/Rhonda_(Fallout:_New_Vegas)?oldid=3461692"
Community content is available under CC-BY-SA unless otherwise noted.